Rooted is a simulation game design where the player takes on the role of a forest, growing and expanding their reach across an environment. The player begins the game in control of a small forest with a single Mother Tree, which nurtures and protects the other trees. By collecting resources, forming connections throughout the forest, and expanding your family, players will overcome a number of ecological threats that face their forest.

The design of Rooted is meant to teach players about how trees communicate and share resources through their interconnections. Recent research shows that trees can communicate with one another, sharing information and resources within kin trees. At the center of these networks are Mother Trees, that provide aid to all the younger trees in the area. Throughout the design of Rooted, we strove to emulate this powerful narrative, and to frame the game’s elements and mechanics on actual contemporary ecological research.

Players begin the game with only a small cluster of trees, and few resources. By sharing resources among their trees and using the environment to their advantage, players can slowly grow their existing tiles into larger trees, and add new tiles to their forest.

As the forest grows and expands, the player can create mycorrhizal connections between their hexes, which improve the flow of resources within the forest, and allow for connected hexes to be upgraded throughout play.

As time passes and the player’s forest expands, they will begin to interact with outside forces, including other families of trees that the player can either collaborate with or compete against.

Eventually, the player’s forest will face all kinds of threats, including forest fires, pestilence, and human encroachment. As the player continues to develop their forest, they will need to spend resources to develop resistances and evolved strategies to the threats. These upgrades can then be distributed throughout the forest for additional resources. This game play pattern emulates the actual evolved traits of trees as researched by forest ecologists such as Suzanne Simard. 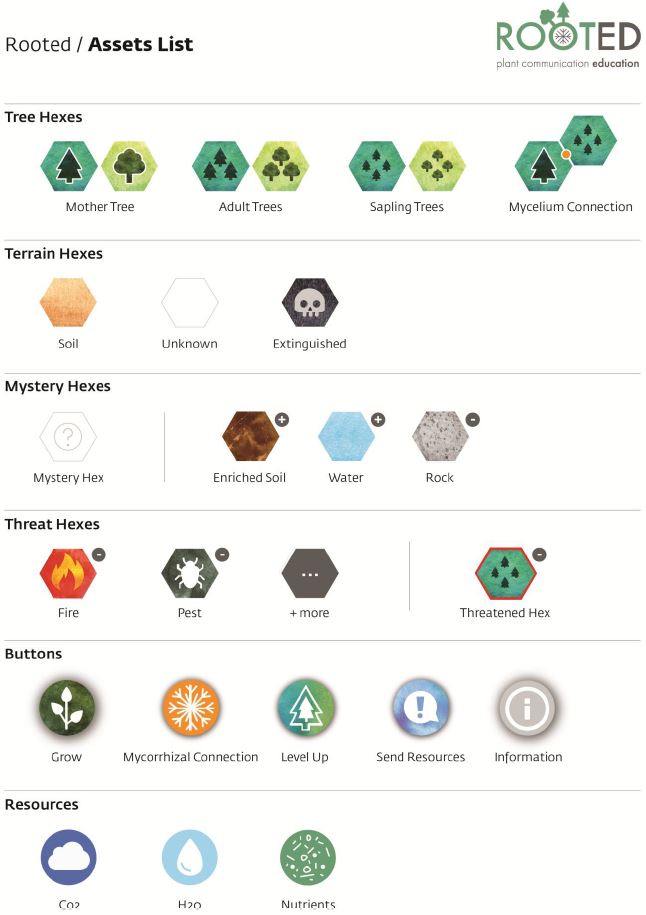 In designing and developing Rooted, I worked alongside two other students in my class, Javiera Valle Toro and Yael Ezer. My primary role was in the game design and learning mechanic design, while Javiera focused primarily on the game’s aesthetic, visual design, and development, and Yael focused on pedagogical design and our research framework.

My work on the project includes the concept of representing gameplay as hexes and resources, and creating design documents and storyboards that led to the final design. I primarily created the learning mechanic – that resources can be shared by different discrete trees within a tree family network. I explored this theme by presenting different threats such as pestilence, fire, and human intervention that research shows trees actually share resources to combat. I developed the mechanics and dynamics for gameplay and wrote the rules of the game.

View all posts by p0rtl